this is meant to be a clan event to show how well we can work together. Plus I know you all wanted to kill each other at some point. The prizes will be given out by me at the end of three rounds. Play for fun not for money. It’s ok to take a break from the grind and just have fun sometimes. If you don’t enjoy it. Don’t come.

This is capture the flag. You have to infiltrate the enemy castle by force and steal their flag. Once you have it you must return to your base with their flag and put it where your flag is on the top floor. Your flag must be there in order to score. All combat styles are used but magic seems to be the most troublesome for freezing. You cannot bring food with you. Deaths are safe and you are locked in the game for 20min once it starts. You respawn on the 2nd floor of your castle and go back at it.
Supplies for barricades, tools and such are available in-game free. But there is a team limit as to how many barricades you can set at once.

you will be locked to a team for three games. Each game is 20min for a total of 1 hour plus intermissions. So plan for a 1.5hour event.

I will ensure that each team has at least one barrage mage to keep a bit of balance.

You will enter the Guthix portal when told and randomly balanced out to a team. You may not switch teams. Sorry.

If you try to cheat and switch teams, you’re not getting paid.

If you leave before all three games are done, you’re not getting paid.

Within the game, you cannot use capes or helms. It’s not my rule it’s the game rule, so sets won’t work.

Mages-Barrage is super OP here. So if you have it use it, if you don’t be prepared to defend against it. Flames of zammy can lower a barrage down to a blitz so if you want offensive defense. Bring a seer curl bow and flames of zammy to hurt the burst and barragers.

Rangers- Dragonstone bolts would do well here as most people don’t bring antifire shield as it takes precious inventory space. You’re going to be useful due to your defense against mages. You should be runners or escorts

Melee- you’re going to want to sling some hurt on people. But watch out for mages. I recommend a hybrid set up because a full melee tank is gonna be good for defending the flag only

Tacticians/runners- your not gonna bring much armor. Just high magic defense, stamina and a lot of inventory space. Make good use of the mining spots underground and collapse rocks on the enemies as they pass through. It’s an instant KO. Also use of barricades and healing teammates with Band-Aids is incredibly useful. Remember the orange potions in there will instantly destroy a barricade. And it takes two to pass the rocks without a pick. Create and destroy wisely!

We play 3 rounds, each person has a chance to receive 1m each round. The winning team for each round gets 1m per player.

So if all three rounds are won by the Sara team, each player on Sara would be making 3m.

In the event of a tie. All players get 500k per tied round.

If there is a crazy universally agreed MVP on a 3-0 game I’ll award them 5m. But it has to be unanimous (I don’t want to give this prize as you should all be doing your best)

Just bring the best gear you can for multiple combat styles. Please be in Discord!

I'm Help. Unlike the rest of these noobs I'm well respected in the community. My star ranked brothers are all autistic or strait up down syndrome kids. Jammy is always too high and gets lost raiding. The Netherland bois eat poop. Mark is short. and the rest of them have HIV.

Test your luck at the brothers and see if you can take home the prizes! The main goal is to open as many chests as you possibly can in a timespan of 120 minutes. Team up with 2 other players and have an even bigger chance at prizes! Different rewards are given for various achievements. …

We are taking it back to where it all began! FIFO will be getting together this weekend to romp about the free-to-play wilderness like an angry and hilarious mob! FTP pking gear is very inexpensive so this is the perfect event for you even if you don’t typically pk! 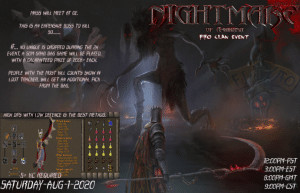